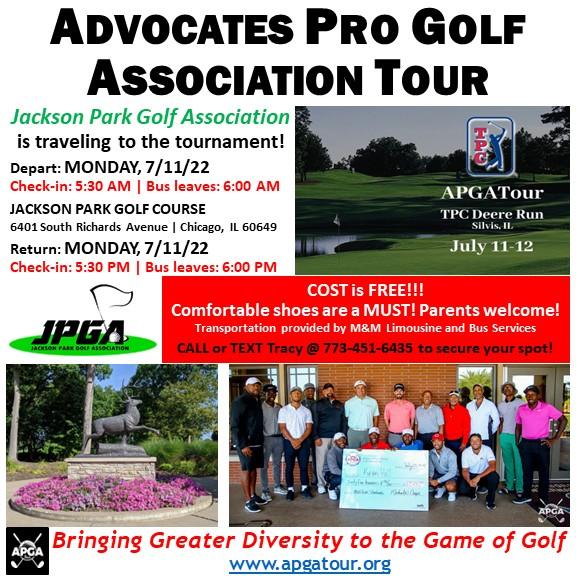 The morning of Monday, July 11, 2022, was a seasonably cool 72°F near the lake at Jackson Park Golf Course as 15
children and 11 adults arrived for their trip to TPC Deere Run in Silvis, Illinois. We also had one member of the Chicago
Women’s Golf Club, Darlene Redmond, meet us there as she drove herself. The travelers were traveling there to be
spectators for the Advocates Professional Golf Association (APGA) Tour and watch pros play golf.
The black, stealthy 56-passenger bus spaciously accommodated the excited travelers, the sandwiches catered by Phat
Katz, and golf clubs stored underneath because some of the children wanted to hit while there. But what made the trip
most special was this would be their first time as spectators watching numerous African American men play golf
professionally!
The children are members of Cousins Empowered Optimist and are called “Superheroes” because of their acumen in not
only the classroom, but also because of their golf skills, which they have diligently honed since picking up a club in 2021.
That’s right, most of the CEO Superheroes never thought about playing golf, careers in golf, and especially not walking
18-holes as spectators alongside golfers on a PGA Tour golf course.
In addition to the Superheroes, we also had recent winner of two Mid-American Junior Golf Tour Girl’s events and rising
senior at Hyde Park Academy, Zell Wilson; rising freshman at Winston-Salem State University and Men’s golf team
member, Ahmad Raoul; and other guests that thought it would be a cool jaunt!
We were about an hour behind schedule of watching the first pros tee off at 8:00 AM and midway, the sky became
ominously darker as nimbus cloud formations moved in rapidly. You know those dark gray, extremely puffy, clouds that
look like we should be traveling in an ark! Well, those clouds brought rain and we could only hope one thing…RAIN
DELAY!
Upon arrival to the course, three pros were standing outside the clubhouse as everyone disembarked from our bus limo.
They looked questioningly at the swarm of people, which was when introductions were made:
“We are the Jackson Park Golf Association and we’ve traveled from Chicago with all these beautiful children to
watch and support you today playing in the APGA Tournament!”
They told us there was an hour and a half rain delay, so we’d be able to see the pros practicing on the range and putting
green as well as catching the first tee times! Upon entering the clubhouse, we met Tim O’Neal (recently invited to play in
a PGA Champions event), J.P. Thornton (playing on APGA Tour for 11 years), and defending Champion, Landon Lyons, all
of whom told their personal stories and motivational words of advice.
After watching some pros practice at the range and listen to more tell their personal story, everyone headed to the first
tee. The children marveled and gasped in awe as one pro after the other stepped up, lined up with his target, waggled,
and let it rip! Balls soared so far down the fairway one could only catch sight of it once it bounced, often in the fairway!
Wow was the word of the day and anxiousness to follow the pros after they hit was very apparent as one youth
repeatedly asked after each pro teed off, “Can we go now?” But, instead of following other groups, one contingency
waited for Chicago’s very own, Mulbe Dillard, IV, to tee off and follow him.
Not only were the children excited to meet the pros and get autographs, but the pros were just as excited to have
spectators! One after another thanked us for being there as well as offering words of wisdom to the aspiring group of
young golfers.
It was a wonderful experience for both groups and a tradition has been set! See you at TPC Deere Run in 2023!